The Benefits of Giving up Alcohol for a Month

Drinking too much? It might be time to talk to a Priory professional. Get in touch for a free addictions assessment today.

What are the benefits of giving up alcohol for a month?

If you're giving up alcohol for a month and are wondering what the benefits will be, Priory has outlined the positive changes you can expect to see over the weeks.

What happens when you stop drinking? A timeline

The alcohol withdrawal timeline below gives the potential symptoms and experiences that someone who is dependent on alcohol might go through when they stop drinking.

It’s important to remember that everyone’s body will respond differently to giving up alcohol and our timeline should only be used as a guide to establish what might happen to your body when you stop drinking.

Up to 24 hours after you stop drinking

Withdrawal symptoms are likely to begin within the first 24 hours of stopping drinking. Depending on the individual and how often alcohol is consumed, they might start from as little as two hours after their last drink. If you were to drink alcohol every night, the withdrawal symptoms may be more severe than someone who only drinks on weekends.

Early symptoms will be mild. They may include anxiety, hand tremors and shakes, sweating and headaches. As time goes on, alcohol cravings will grow and a feeling of fatigue and depression could begin.

12-72 hours after you stop drinking

For some, more serious withdrawal symptoms will begin after 12-24 hours. In rare, more severe cases, you might develop delirium tremens (DTs). Symptoms could include seizures, hallucinations and a significant increase in heart rate and blood pressure. This is a dangerous period for anyone who has stopped drinking and is experiencing withdrawal.

48-72 hours after you stop drinking

For the majority, the symptoms of withdrawal will begin to subside at this point, allowing you to function more normally and manage your symptoms. Symptoms of DTs may continue for some, with a feeling of disorientation and delusions alongside other severe withdrawal symptoms like heavy sweating and high blood pressure.

Between 3 and 7 days after you stop drinking

After a few days of giving up drinking, most people can expect their symptoms to stop. For the more severely affected, DTs and severe withdrawal symptoms may continue. For these people, medical supervision is recommended when giving up alcohol.

Week one of giving up alcohol 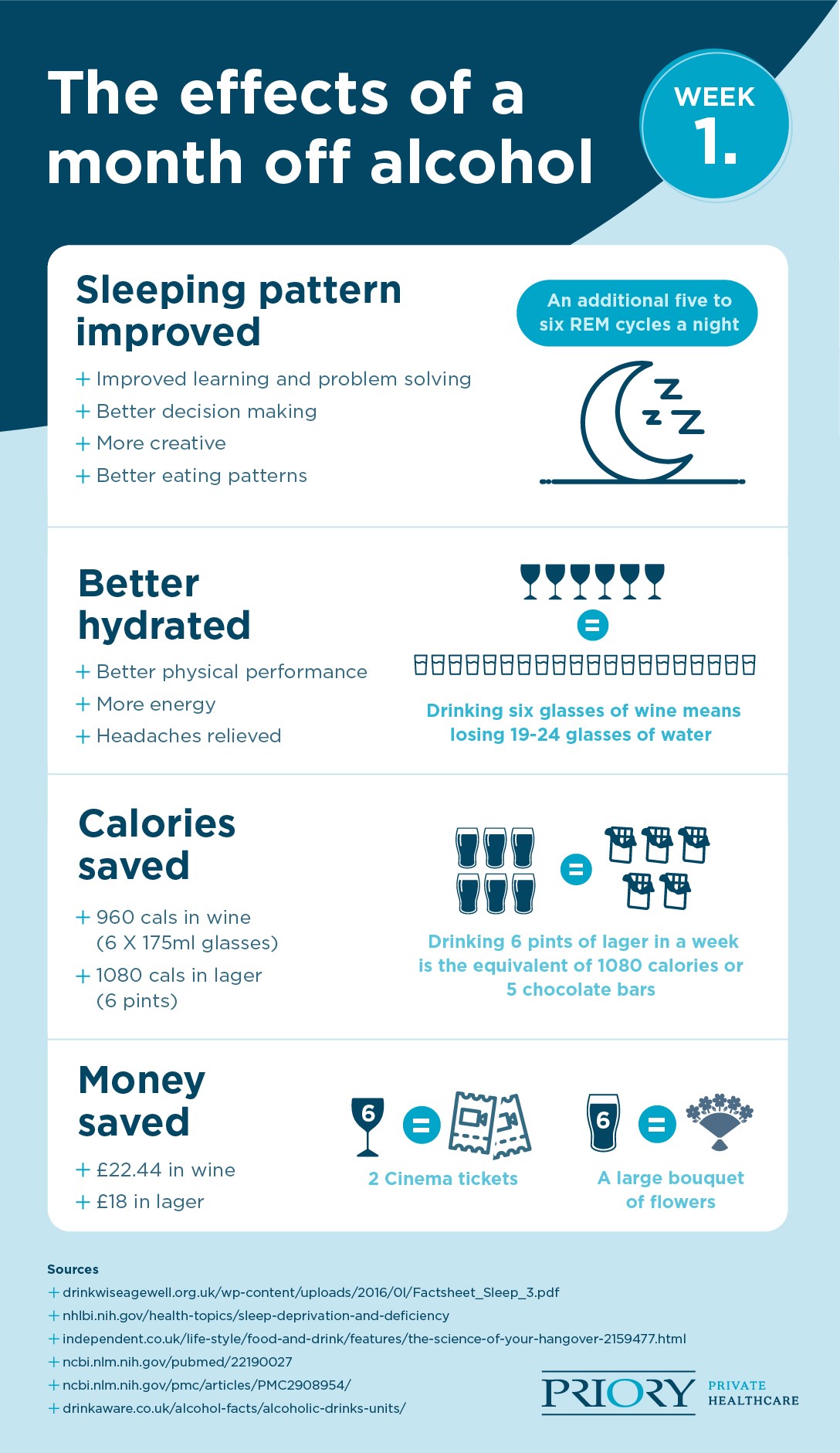 After one week away from alcohol, you may notice that you are sleeping better. When you drink, you typically fall straight into a deep sleep, missing the important rapid eye movement (REM) sleep. While you are supposed to have between six and seven cycles of REM sleep a night, you typically only have one or two when you’ve been drinking.

There are many benefits of better sleep. You will be more productive, where you can learn and problem solve better. Your ability to control your emotions and behaviour will also improve.

When you drink alcohol, you lose around four times as much liquid as what you actually drank.

Dehydration can cause headaches, as your organs take water from the brain due to their own water loss. Salt and potassium levels also reduce, which can impact nerve and proper muscle function while also causing headaches, fatigue and nausea.

Therefore, giving up alcohol can help you keep well hydrated, which is in turn beneficial for your brain. Your mood and concentration will be more stable, and the frequency of headaches is likely to decrease. You also won’t suffer from the effects of dehydration such as lack of motivation and increased fatigue, so will have more energy throughout the day.

If you were to give up drinking six 175 ml glasses of wine a week, you would save around 960 calories, which is the equivalent to three burgers or five and a half bags of crisps.

And if you were to stop consuming six pints of average strength lager a week, you would save 1080 calories, which is similar to six bags of crisps or five chocolate bars.

Week two of giving up alcohol 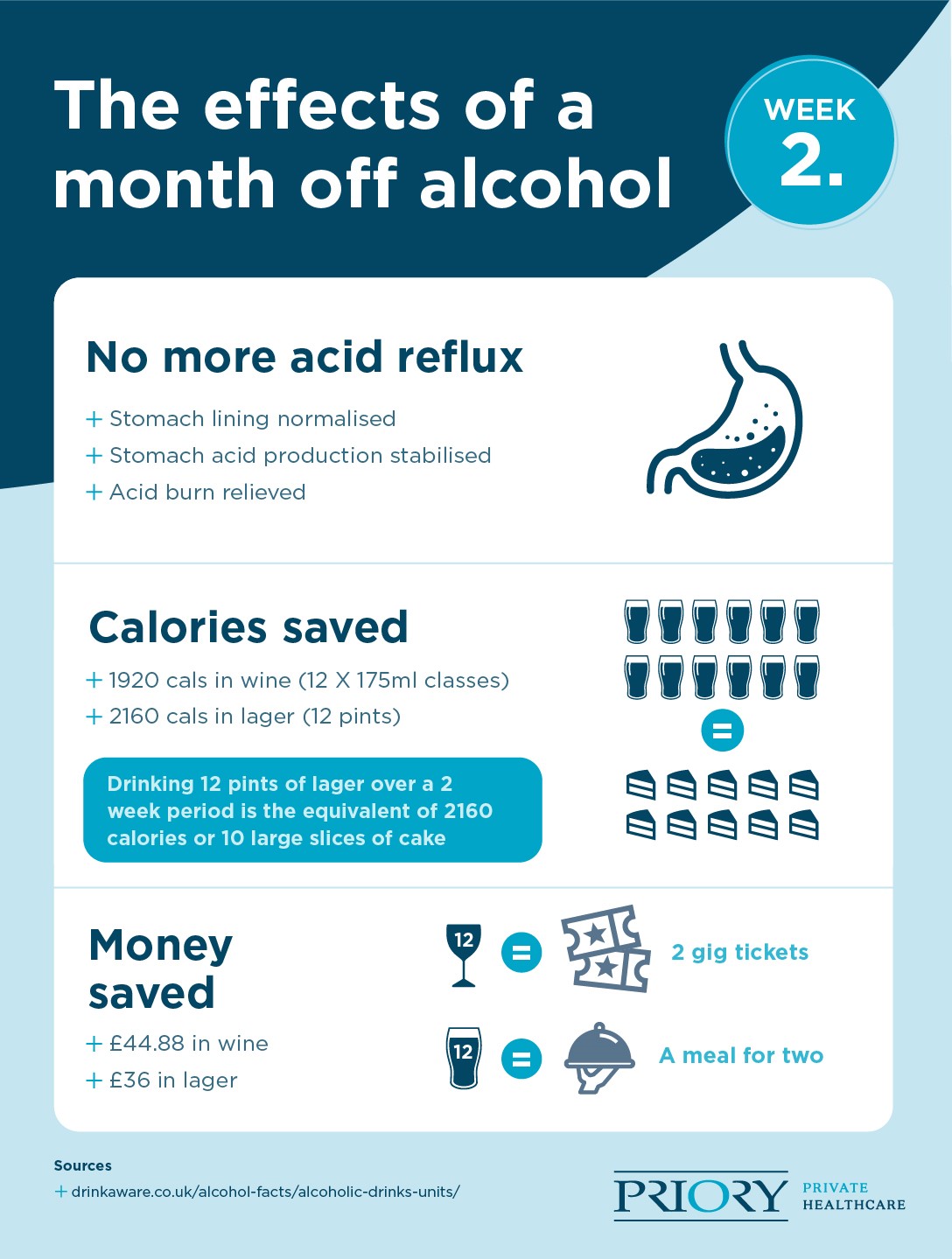 After two weeks off alcohol, you will continue to reap the benefits of better sleep and hydration.

As alcohol is an irritant to the stomach lining, after a fortnight you will also see a reduction in symptoms such as reflux where the stomach acid burns your throat.

After a fortnight, you are also likely to start losing weight as a result of giving up alcohol’s empty calories. If you were to stop drinking six 175ml glasses of wine per week, you would have saved 1920 calories at this point, and 2160 if you’d stopped drinking around six pints of lager.

Week three of giving up alcohol 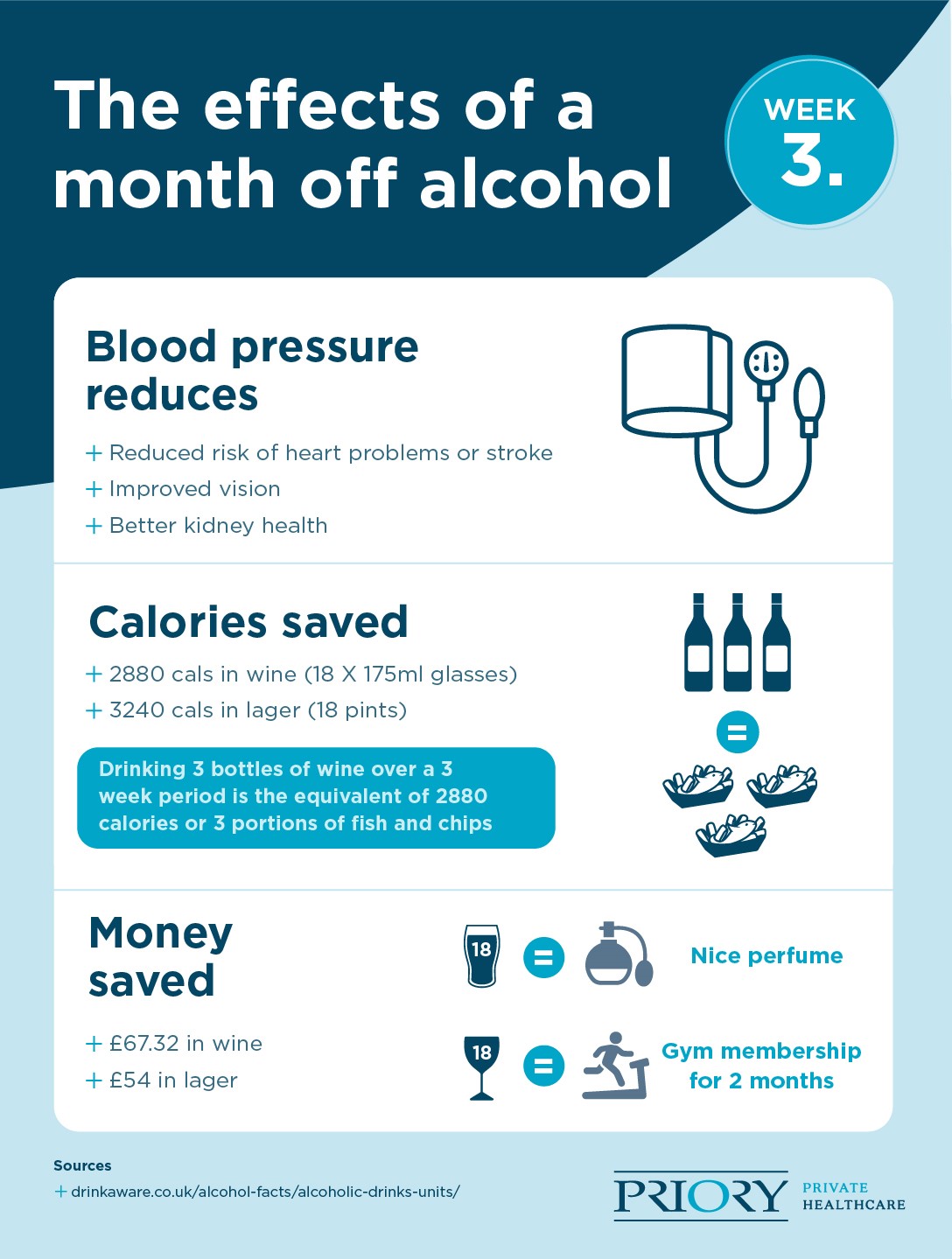 As the calories in alcohol can cause you to gain weight, giving up alcohol can also help you to reduce your blood pressure as a result of the weight you can potentially lose. By this point, if you’d previously been drinking six 175ml glasses of wine a week, you would have lost 2880 calories over three weeks. And if you’d been drinking six pints of lager a week, you would have lost 3240 calories.

Week four of giving up alcohol

Giving up alcohol will have a positive impact on your skin due to you having better levels of hydration. As more water will have been absorbed rather than wasted, you are likely to have more hydrated-looking skin, as well as reduced dandruff and eczema.

With the liver playing a part in over 500 vital processes, you also give your body a better chance of removing contaminants, converting food nutrients, storing minerals and vitamins.

Benefits of not drinking alcohol

Giving up drinking has a wide range of great benefits to our physical and mental health, some of which are named above. Here’s an extensive list of the benefits of not drinking in the long-term:

If you are struggling with alcohol and are finding it hard to quit, you may want to think about getting support. We understand that embarking on recovery from alcohol addiction can be an emotionally difficult time.

For details of how Priory can provide you with assistance regarding addiction treatment and rehabilitation, please call 0800 144 8969 or click here to book a FREE ADDICTION ASSESSMENT. For professionals looking to make a referral, please click here