How Long Does Weed/Marijuana Stay In Your System?

How long does weed stay in your system
Additional Information


Marijuana, also known as weed, cannabis or pot, is a drug that is derived from the cannabis sativa plant. Within the plant is a chemical known as tetrahydrocannabinol (THC), which produces a ‘high’ when someone smokes, ingests or vapes it.

UK statistics show that almost 30% of people aged 16-59 have taken marijuana at least once in their lifetime. THC can result in feelings of calmness, relaxation and tranquillity, which can make people want to take this drug over and over again. However, repeated use can result in you developing a harmful addiction to this substance.

Weed might be detected in your system for up to 90 days after you’ve taken the drug, depending on a number of factors, including:

Read on to find out more about how long marijuana can be detected in your urine, blood, saliva and hair.

How Long is Cannabis Detectable via Drug Testing? 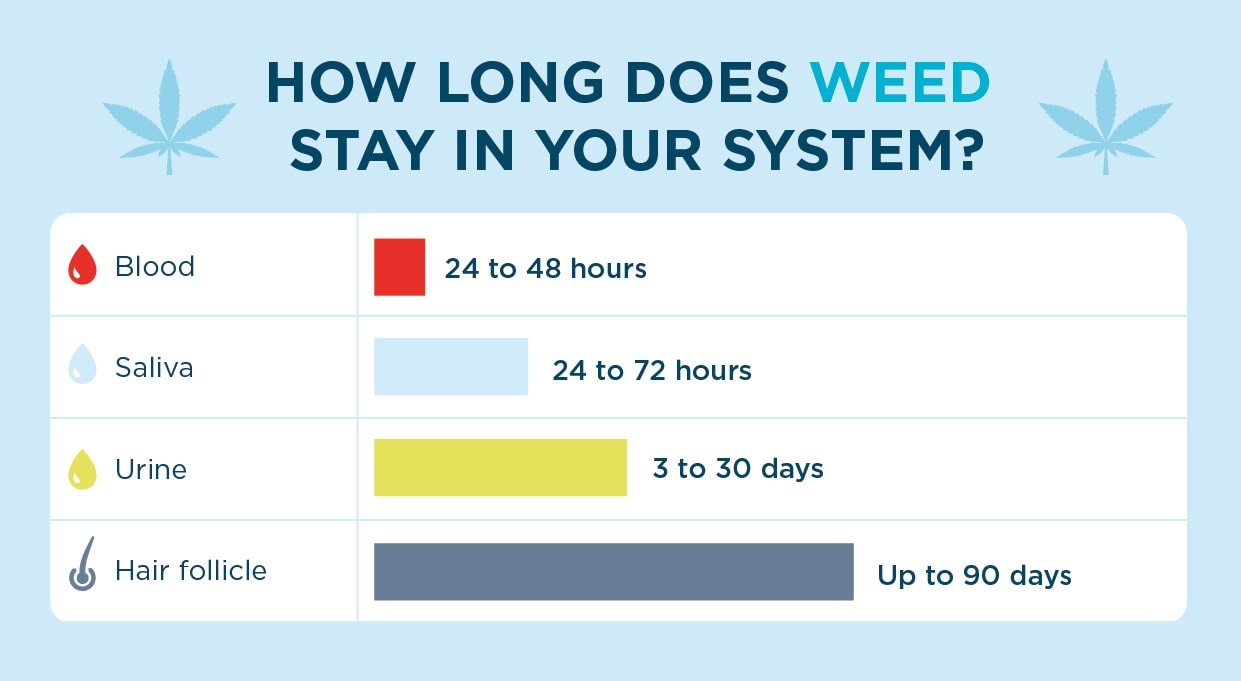 Information published by Drug and Alcohol Information and Support Ireland suggests that, typically, cannabis can be detected in your blood for around 1-2 days after use.

The level of use can increase this significantly. A study by Therapeutic Drug Monitoring suggests that in some chronic users, the drug can still be detected in your blood for up to 25 days after your last use.

The Mayo Clinic Proceedings’ Clinical Interpretation of Urine Drug Tests suggests that marijuana can be detected in your urine anywhere from a few days to several weeks after your last use. This depends on the individual’s level of usage. Generally, the guidelines suggest that:

MedlinePlus states that urine testing is the most common type of test used for detecting marijuana.

Saliva is often the method of choice for roadside drug testing of drivers. Saliva tests can pick up cannabis use in your system anywhere from 24-72 hours after your last use.

THC makes its way into hair follicles via your bloodstream, making hair testing another option for finding marijuana in your system. A hair test could detect the drug up to 90 days after your last use.

Hair tests tend to be less reliable than other forms of cannabis drug testing. If you’ve been in contact with second-hand marijuana smoke, or your hair comes into physical contact with someone who has touched cannabis, it could find its way onto your hair strands and result in a false positive.

What Are the Varying Factors That Affect How Long Weed Stays in Your System?

The question of how long marijuana stays in any one person’s system depends on a number of factors. Some of these are related to you as a person and others relate to the extent of your use. Many of these relate to your ability to metabolise the drug, rather than anything to do with the test itself.

Here are some of the factors that might affect how long weed stays in your system:

There is nothing reliable that would lead to a faster metabolising of weed in your system. Some weed detox kits are available, which claim to help you dilute (and mask the dilution) of drugs in your system. However, these kits are known to be unreliable.

How Long Do the Effects Last?

According to TalktoFrank, the effects of cannabis can be felt as little as 1-2 minutes after smoking it. When cannabis is ingested, it can take as long as 45 minutes to feel the effects. Generally, the ‘high’ you get from weed will last between 40 minutes to an hour or more.

Cannabis is the fourth most abused drug in the UK, with many thousands of people requiring treatment and support after developing an addiction. Cannabis misuse is a serious problem that can seriously debilitate someone’s life, but today, many effective treatments exist that allow people to make a recovery.

At Priory, we can deliver world-class cannabis addiction treatment, including detoxification (if this is required), residential rehab and outpatient therapy, throughout our nationwide network of addiction hospitals, clinics and wellbeing centres.

Book your free addiction assessment, or call us on 0800 144 8969 for more information about how we help those struggling with cannabis addiction every day.

For details of how Priory can provide you with assistance regarding addiction treatment and rehabilitation, please call 0800 144 8969 or book a FREE ADDICTION ASSESSMENT.

For more information about the addiction services that Priory offer, download our brochure.