The terms ‘panic attack’ and ‘anxiety attack’ are often used interchangeably. However, there are some key differences between the two that we’ll explore here.

What is the Difference Between a Panic Attack and an Anxiety Attack? 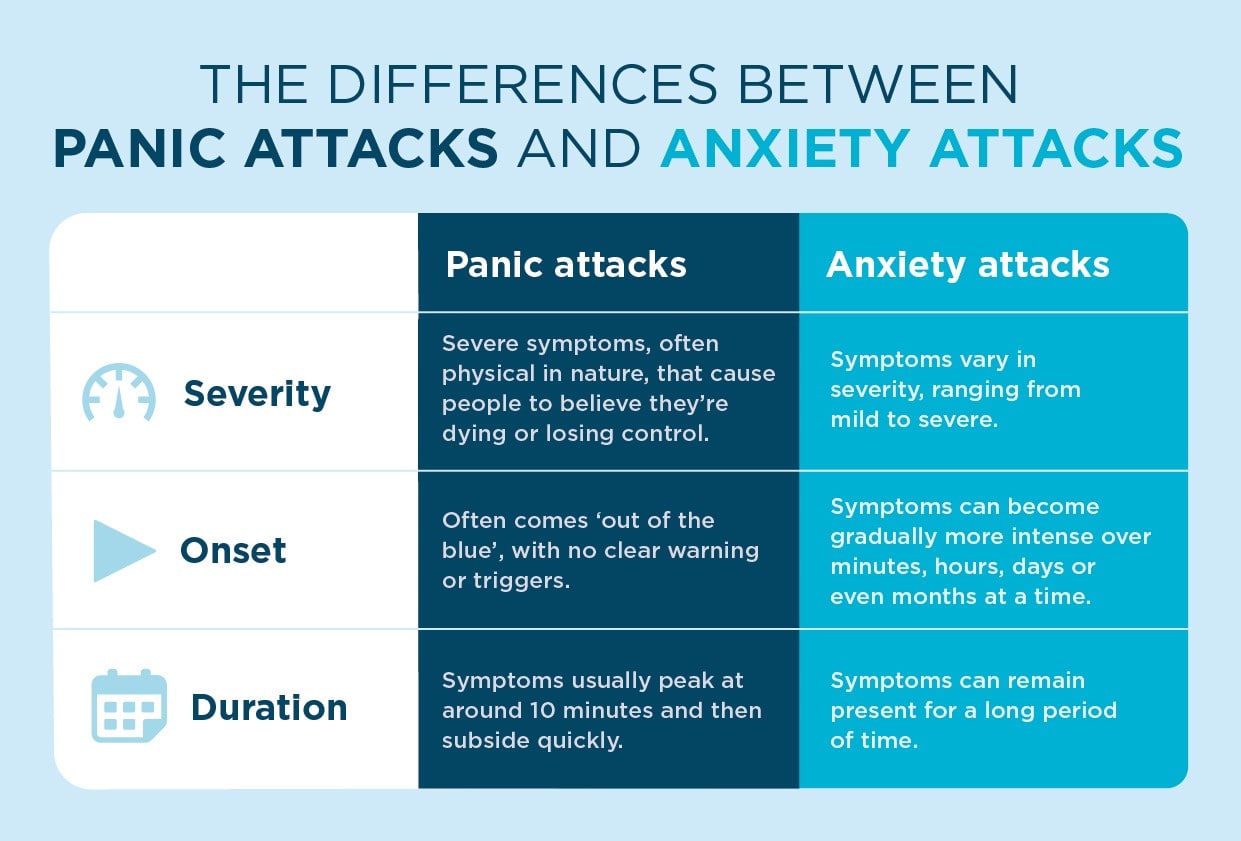 The term ‘anxiety attack’ is not formally acknowledged as a mental health diagnosis, although it’s widely recognised that anxiety is a common symptom of many psychiatric disorders and a core component of anxiety disorders such as obsessive compulsive disorder (OCD), post-traumatic stress disorder (PTSD) and phobias.

Anxiety is usually felt in response to a situation that feels threatening or stressful. It tends to build for a while, with symptoms sometimes persisting for months at a time. Anxiety can range in severity from mild to severe; some people are characterised as having ‘high functioning anxiety’ which means that they tend to feel anxious most of the time but are still able to go about their daily lives fairly effectively.

The symptoms of anxiety include:

Panic attacks usually happen out of the blue with no clear triggers. Some people even experience panic attacks in the middle of the night, waking them from sleep. However, for some people, panic attacks may be ‘expected’ because the panic is linked to a known stimuli e.g. a phobia. Having a panic attack can also cause you to worry that you’ll have another attack which can lead to avoidance behaviours.

However, unlike anxiety, the symptoms of panic attacks are always more severe in nature. They’re usually associated with a range of distressing symptoms that disrupt an individual’s ability to cope or even think clearly. In addition, physical symptoms, such as chest pain, breathing difficulties, hyperventilating and heart palpitations, tend to be much more intense in a panic attack than in someone experiencing anxiety.

The features of a panic attack include:

Similarities Between a Panic Attack and an Anxiety Attack 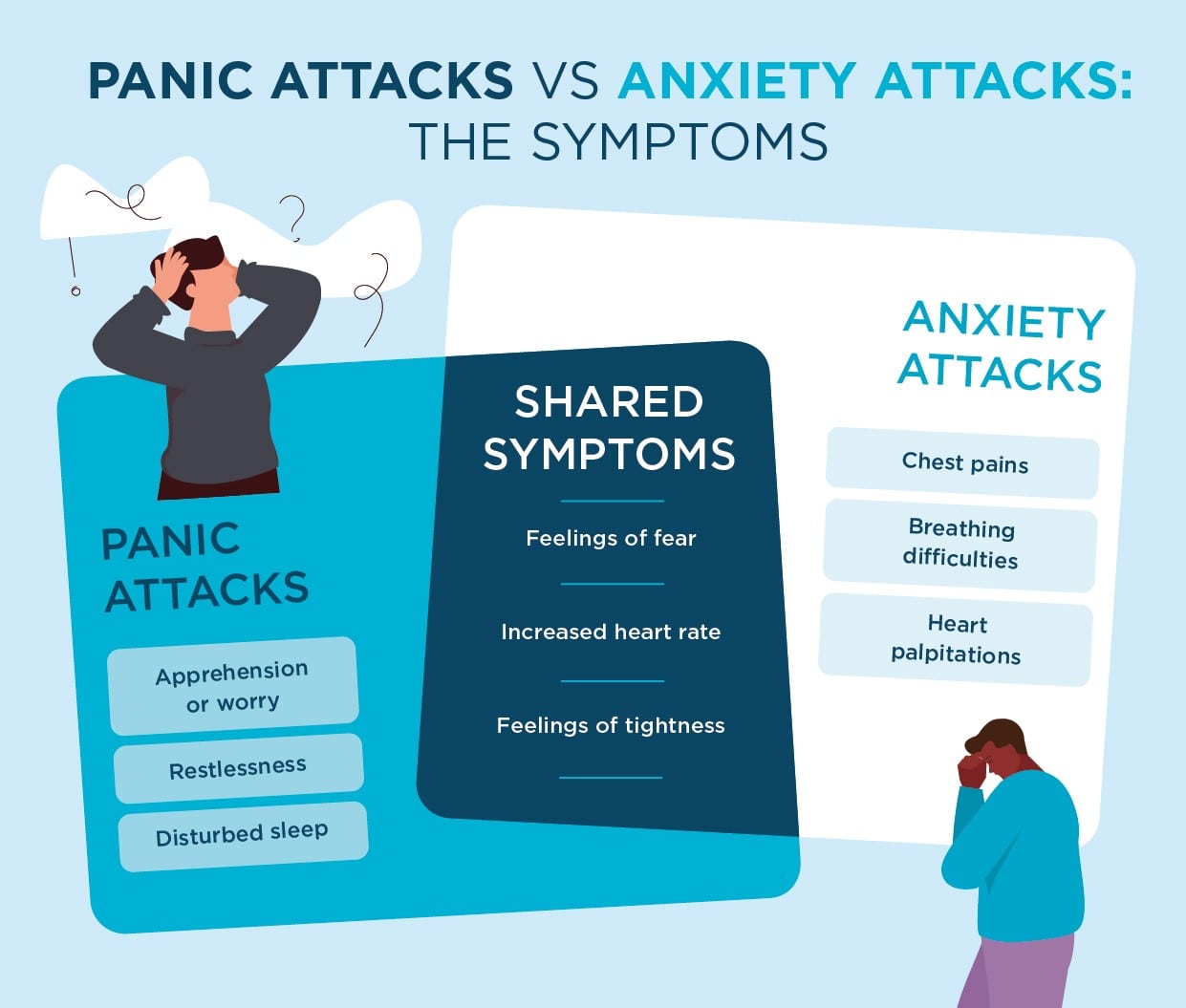 There are a number of symptoms that are associated with both anxiety and panic attacks, albeit with differences in the severity, onset and duration of these symptoms. These include:

Diagnosis and Treatments for Anxiety and Panic Attacks

Fundamentally, anxiety and panic attacks are distinct conditions but both can have an incredibly negative impact on individuals who struggle with them.  At Priory, we can offer specialist anxiety treatment and evidence-based treatment for panic attacks, helping you to get back on track.

If you think you may be experiencing anxiety or panic attacks, it’s really important to reach out for professional support. You could make an appointment to see your GP in the first instance. They will be able to assess your symptoms and refer you for specialist mental health treatment, if appropriate. Alternatively, you may wish to contact a private provider, such as Priory, directly. We’ll be able to arrange for you to have an assessment with one of our world-class psychiatrists who will be able to diagnose your anxiety or panic attacks, and work with you to formulate an effective treatment plan.

We can offer a number of different treatment programmes for mental health at Priory, including inpatient treatment, outpatient and day care treatment and online therapy, depending on your individual needs. We also offer a wide range of evidence-based therapy types to treat anxiety and panic attacks, which can take place on a one-to-one basis or as part of a group. The most common therapeutic techniques that are used for these conditions are cognitive behavioural therapy (CBT) and exposure therapy.

It’s important to understand that you don’t have to suffer with anxiety and panic attacks. Effective treatment can help you to overcome your symptoms, develop an understanding of why you feel the way you do, and support you every step of the way towards recovery.