Priory Offers Support for those Affected by the Ukraine Conflict

Everyone at Priory has been deeply shocked and saddened by the ongoing conflict in Ukraine. At this difficult time, our thoughts are with our colleagues from Ukraine, who are concerned about the safety of loved ones, families and friends.

Staff members in our sites and offices across the company have been working incredibly hard to raise funds and join the humanitarian effort to help those affected by the conflict. MEDIAN Priory are also showing our support with a commitment to double colleague donations, up to a total of 100,000 Euros, in the United Kingdom.

Our colleagues are being offered both Ukrainian and Russian speaking counsellors and practical support, and we’re reviewing all of our international suppliers to see whether they have any connections to or are working with Russian state companies or the Russian government. If these relationships are not terminated, we will also stop working with these suppliers.

We’re extremely proud of the efforts of everyone who has contributed so far. Below, you can find just a few of the amazing projects Priory colleagues have setup to raise money and aid for the Ukraine appeal.

Jodie Rogers, Maintenance Lead said: "Here at The Priory Hospital Southampton we wanted to do something to raise money for Ukraine, we love the fact that Priory are matching all money raised. Recently had a Bric-a-Brac sale to raise money.

Colleagues donated items they no longer need/use and could then purchase these items in exchange for making a donation. 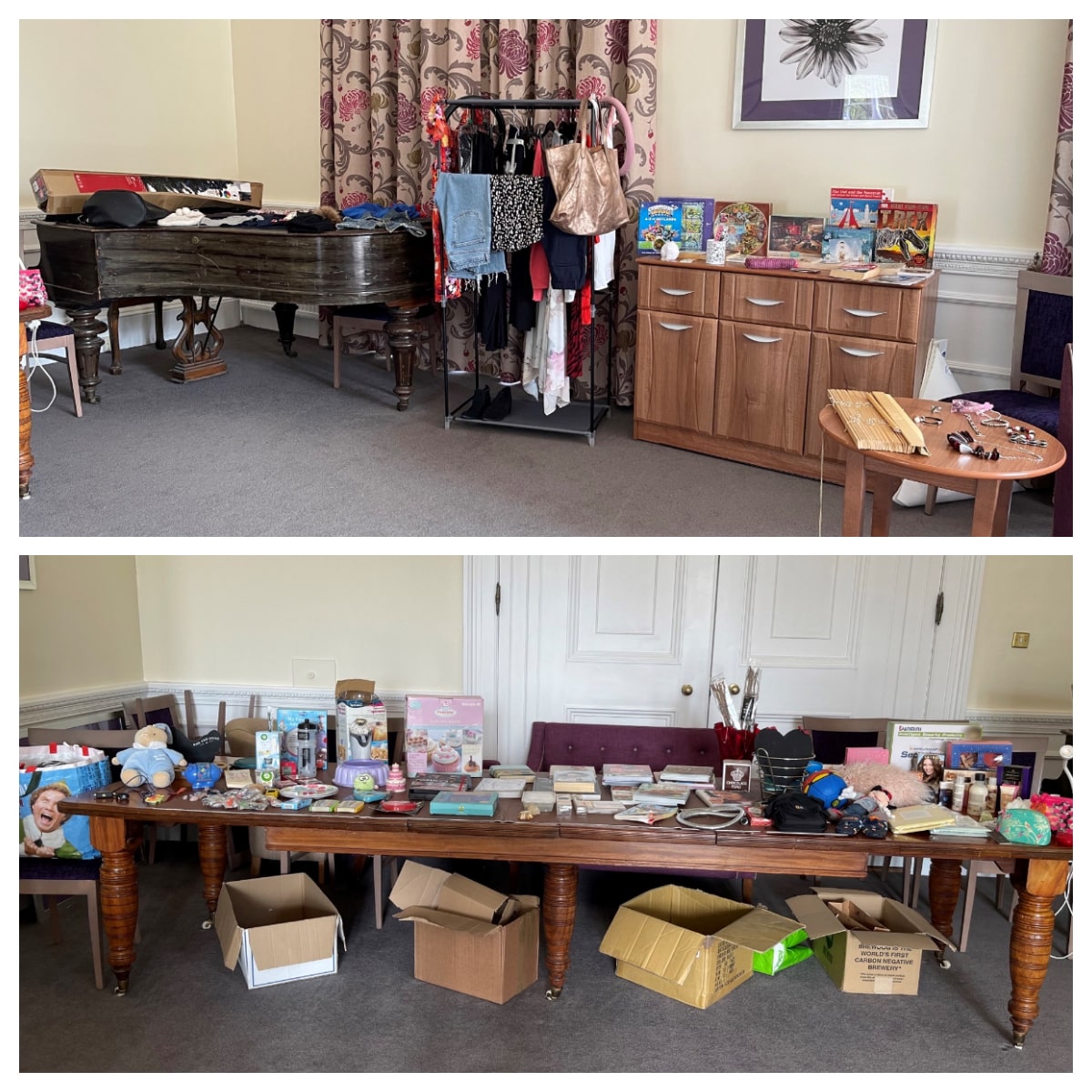 A patient from Burston House has been raise money for the Ukraine appeal because ‘it has a very personal meaning to him’ and that deciding to fundraise has made him feel that he is ‘making a contribution to the Ukrainian people caught in a war that should not be happening’.

Angela Ellis, Ward Clerk, at Burston House said: “Jhas purchased the resources and is making bracelets in return for a voluntary donation of £1 for a plain bracelet and £1.50 for the bracelet with the “made with love” pendant.  They have been selling fast among us all and he is really proud that Priory have recognised his efforts by agreeing to match his fundraising total and appear in the Proud to be Priory Newsletter.”

“J and many other patients and staff have purchased items such as food, toiletries, first aid supplies and personal items to send to Ukraine.  Patients have been decorating shoe boxes to send the items to donation points.” 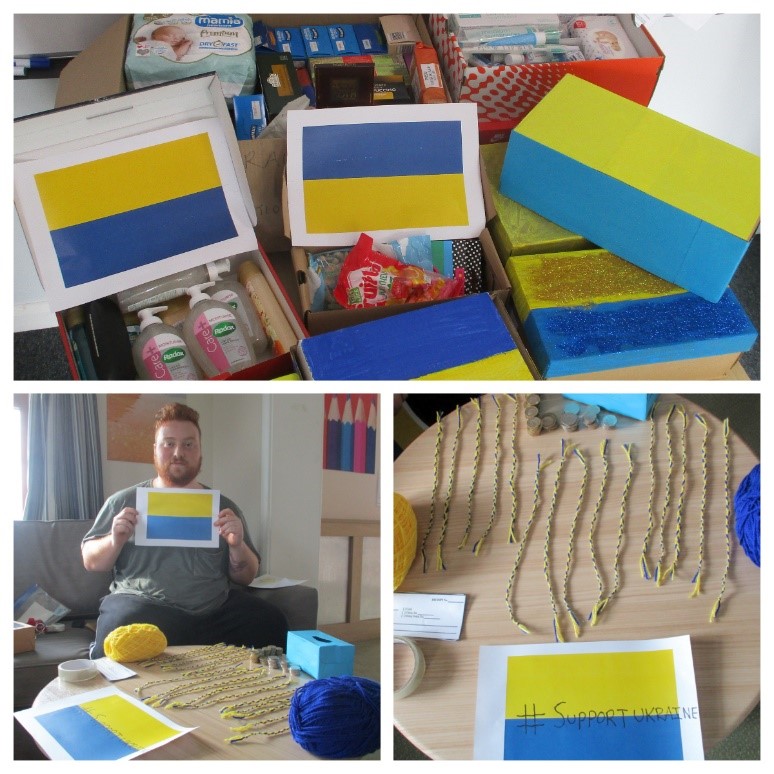 Both colleagues and patients have been busy with the weighing scales as they contribute generously to an onsite Cake Sale at Priory Hospital Woking, with all proceeds going to the Ukraine appeal.

So far, the fundraiser has brought in an amazing £400, with the hope of more to come. Big thanks to everyone at Woking who has baked, bought or both. 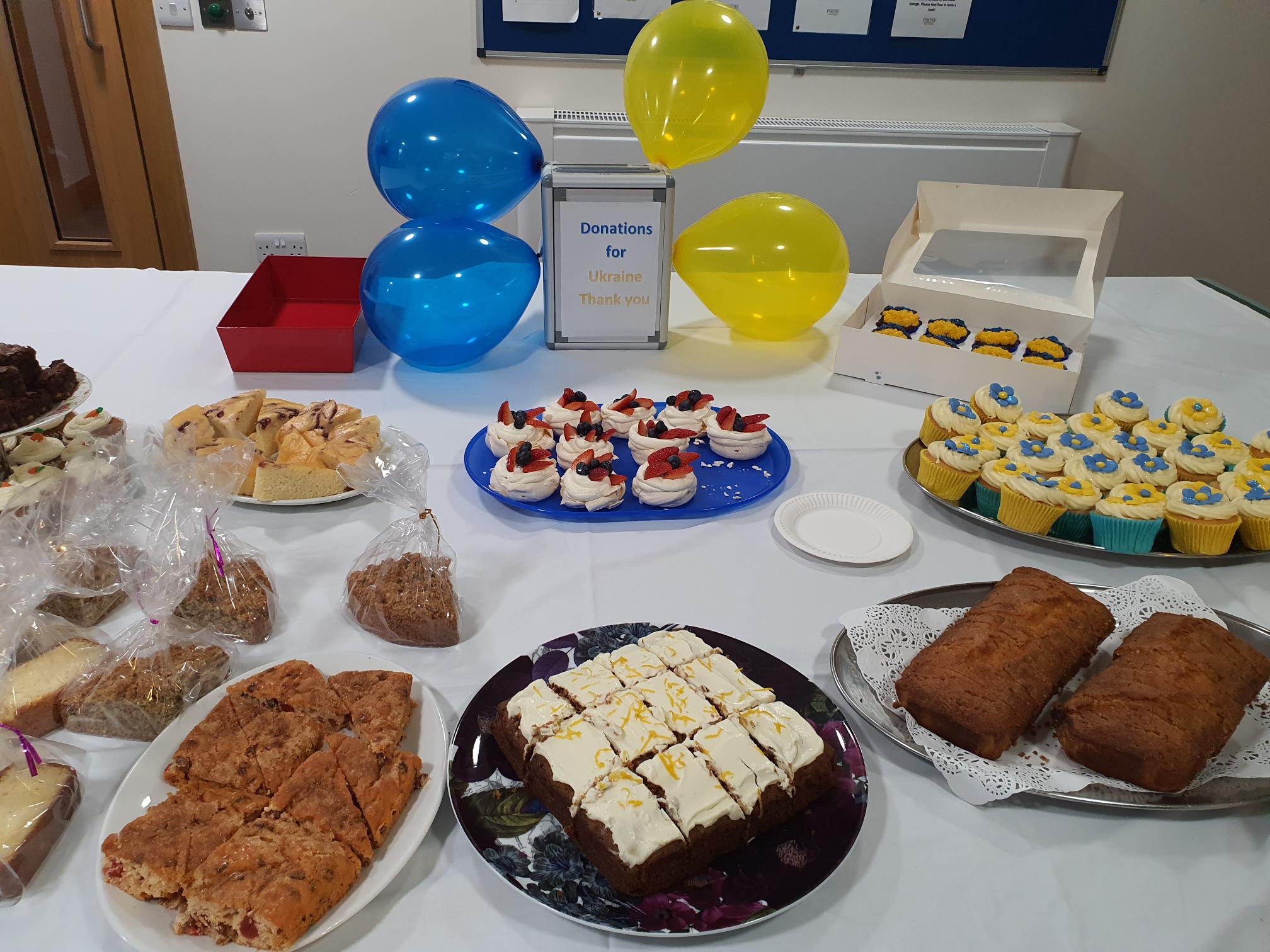 Priory Leicester Central Services office have been hard at work donating whatever they can to support the humanitarian effort in Ukraine. Key supplies, from hygiene products to dog food, have been compiled into care packages ready for those who need them.

Melanie Parker, Office Manager and PA, Leicester, said: “The Leicester office and Central Services staff joined forces to respond and support the Ukrainian Appeal by donating items for aid, or giving me cash to purchase items on their behalf.”

“Donations are still coming in, but two loads are already on the way to the Ukraine. We wanted to do our bit to help and I am very proud of everybody.”

We share Melanie’s pride in everything that’s been done so far from the Leicester office – keep up the good work! 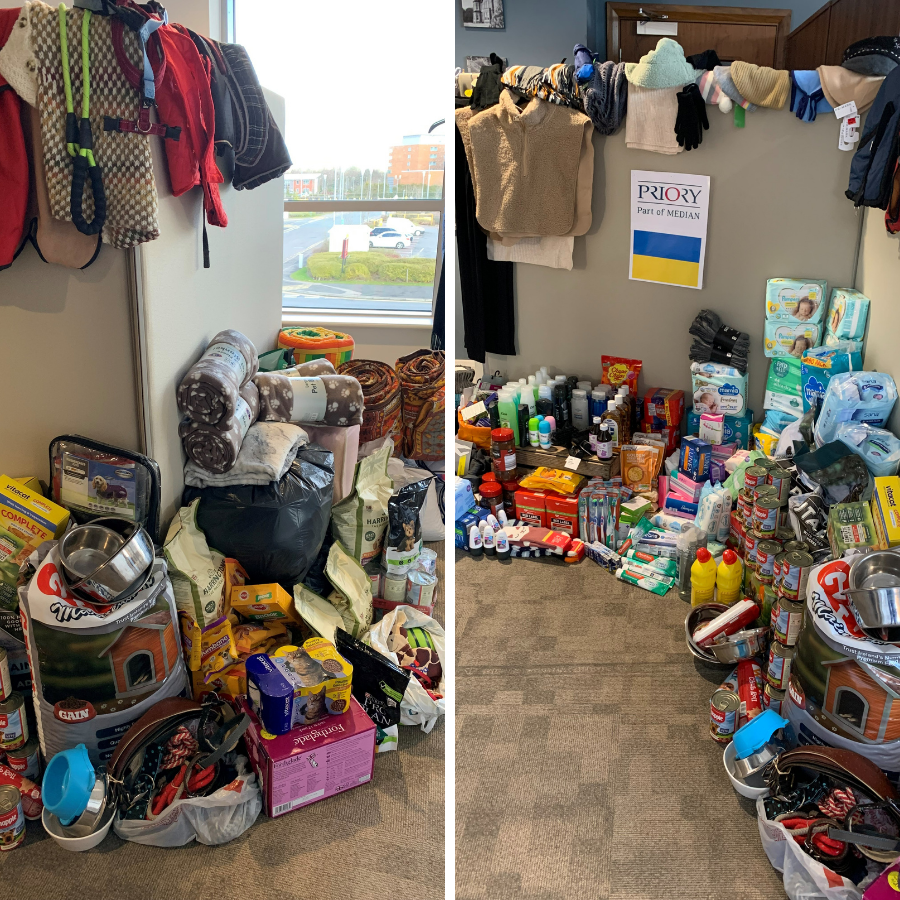 Lichfield Road team came together in solidarity for the Ukraine.  Rowena Bennett, Hospital Director, launched an appeal at site asking for donations from the team for Ukrainian refugees. The service users at Lichfield Road soon got wind of the initiative and wanted to get involved and during their Bingo Group decided to choose prizes which they could donate to the cause.

By the end of the first week they had quite a collection building and it became apparent that the local donation point was not equipped to take the quantity that was starting to build.  By the end of the second week and following a Facebook appeal the team were able to link in with a local group who were planning a convoy of vehicles to the Poland-Ukraine border and were able to accommodate the collection which was taken on 14 March.

Claire Garfield, Director of Clinical Services, Priory Litchfield, says: “I am so proud to have been part of this amazing donation haul from the staff and service users at Priory, Lichfield Road. The generosity of our little family never ceases to amaze and humble me. United, we stand with Ukraine.” 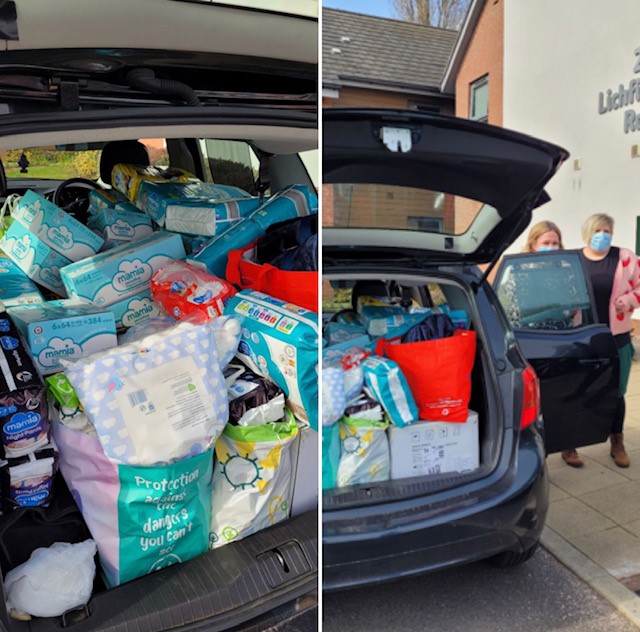 Priory Hemel Hempstead decided to hold a raffle with all monies collected donated to a non-profit organisation providing aid for Ukraine citizens.

The raffle was organised by receptionist Barney Hall following a discussion with Dean Shortt, Support Services Manager. The raffle tickets were sold to patients and colleagues, with the added bonus that Priory MEDIAN will match the donations. Barney made four lovely hampers of assorted items to be offered as prizes.

Kemple View, Blackburn held various events to raise funds for the Ukraine Appeal, as requested by the service users.

Colleagues and service users took part in the, ‘Walk With Recovery for Ukraine’ and Memory Walk, walking laps around site, and raised £141.

In total, Kemple View raised a fantastic £474.14 for the Ukraine Appeal. 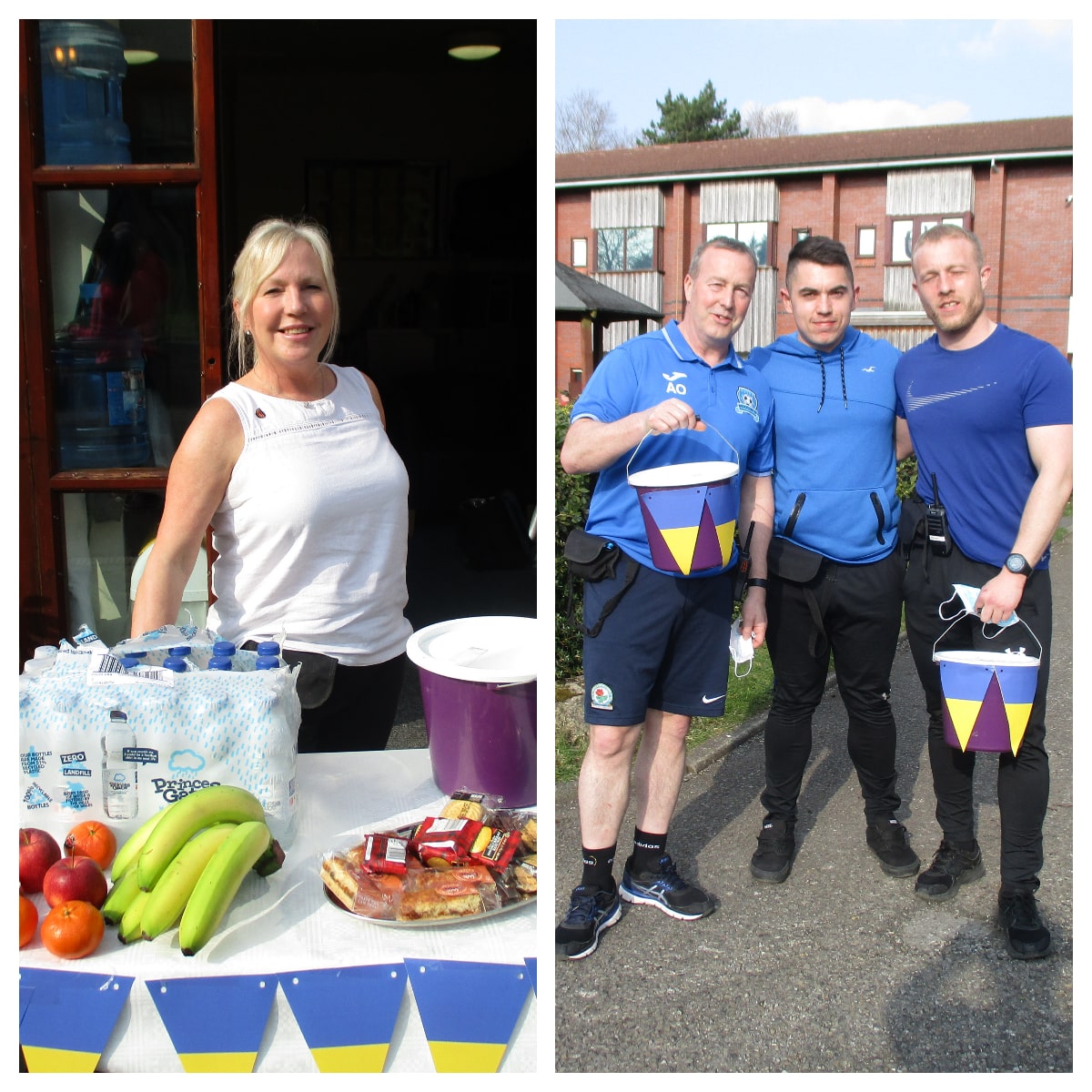 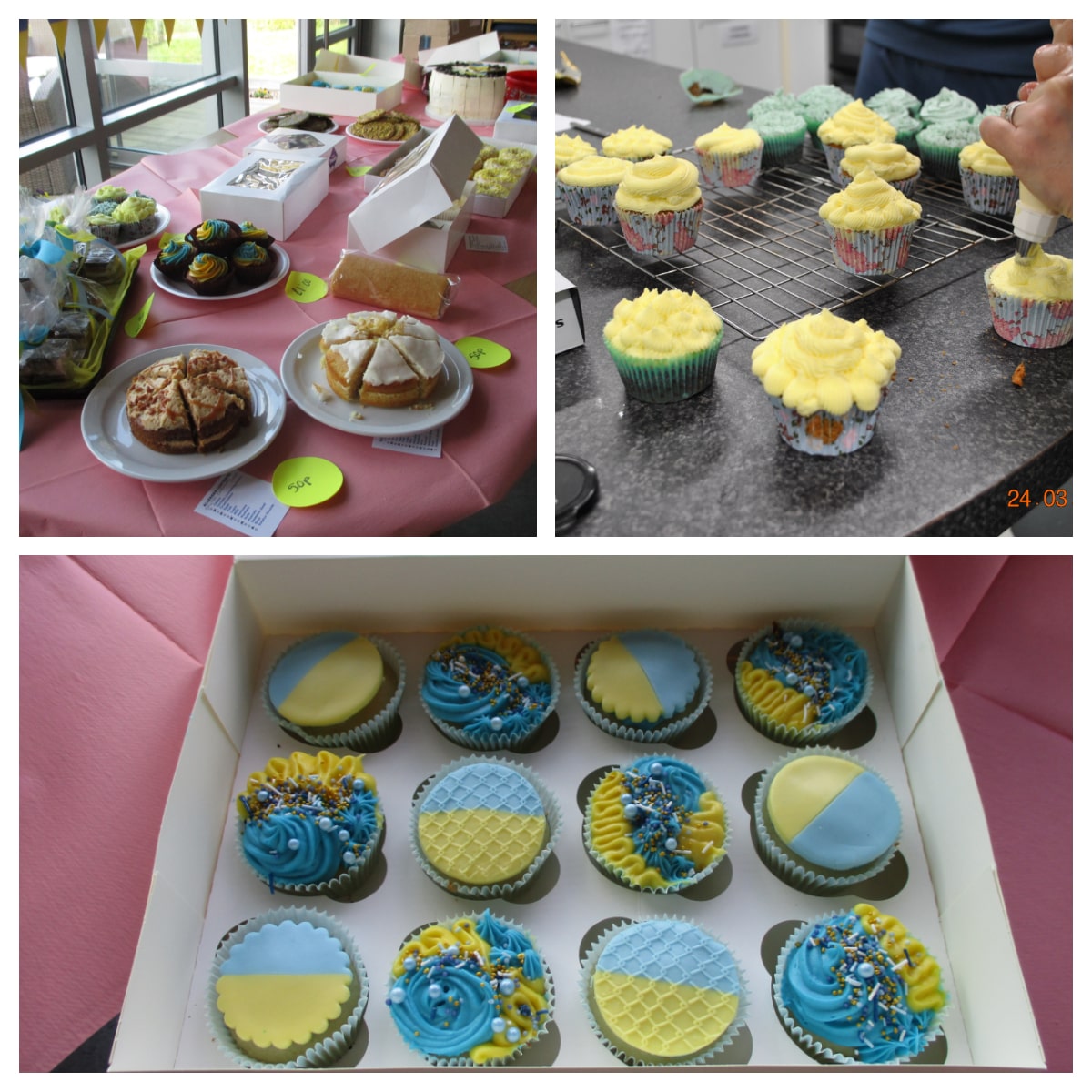 Patients from the Dalby ward at Stockton Hall Hospital suggested a fundraiser for Ukraine. It was decided that all staff and patients would be encouraged to wear the colours of the Ukraine flag– blue and yellow for the day and make a donation.

We held an open coffee morning serving drinks including our Ukraine blue and yellow mocktail. Cakes and snacks were sold and there were stickers and transfer tattoos available for customers which proved a big hit! One of our patients provided some music for the event by playing some live guitar– again this went down well with those that attended– they even played some requests!

All the amazing efforts at Stockton Hall raised £162 - which Priory has matched to total £324! A big thank you to everyone involved.

Rotherham - A colleague in Rotherham said: “I have raised £70 pounds and bought First Aid, toiletries and food Supplies which have been donated Support Ukraine Rotherham to be shipped to the polish border and distributed to the Ukrainian refugees.”