Depression: What Causes it?

Outlining the most common genetic, psychological and environmental causes of depression.

Understanding the Causes of Depression

Depression is a complex mental health condition and research suggests there isn’t a single cause for it. Your chances of developing depression are likely to be down to a combination of factors. These include genetic or psychological factors that mean someone may be more vulnerable to developing depression, as well as environmental stresses or triggers.

While there are some factors and triggers that may make someone more predisposed to developing depression than others, it’s a very personal illness and we each experience depression in our own way.

The genetic element of depression is complex and not everyone who has a genetic predisposition to depression will become depressed. Also, how vulnerable we are to stresses and triggers is unique to all of us and is based on the interaction between our genes as well as our life experiences, which shape our view of the world. That’s why a major life event such as a relationship breakdown or bereavement may trigger a depressive episode in one person but not someone else.

At the same time, someone may have no genetic vulnerability, and may not have experienced any of the triggers linked to depression, and may still become depressed. In these cases, someone’s depression may have come on for what can only be assumed are internal reasons such as chemical changes in the brain.

Here, we explore the underlying factors that could increase your chances of becoming depressed, and look at some of the triggers that are linked to depression.

Why do People get Depressed?

Research shows that there are a number of underlying factors that can make you vulnerable to developing depression. 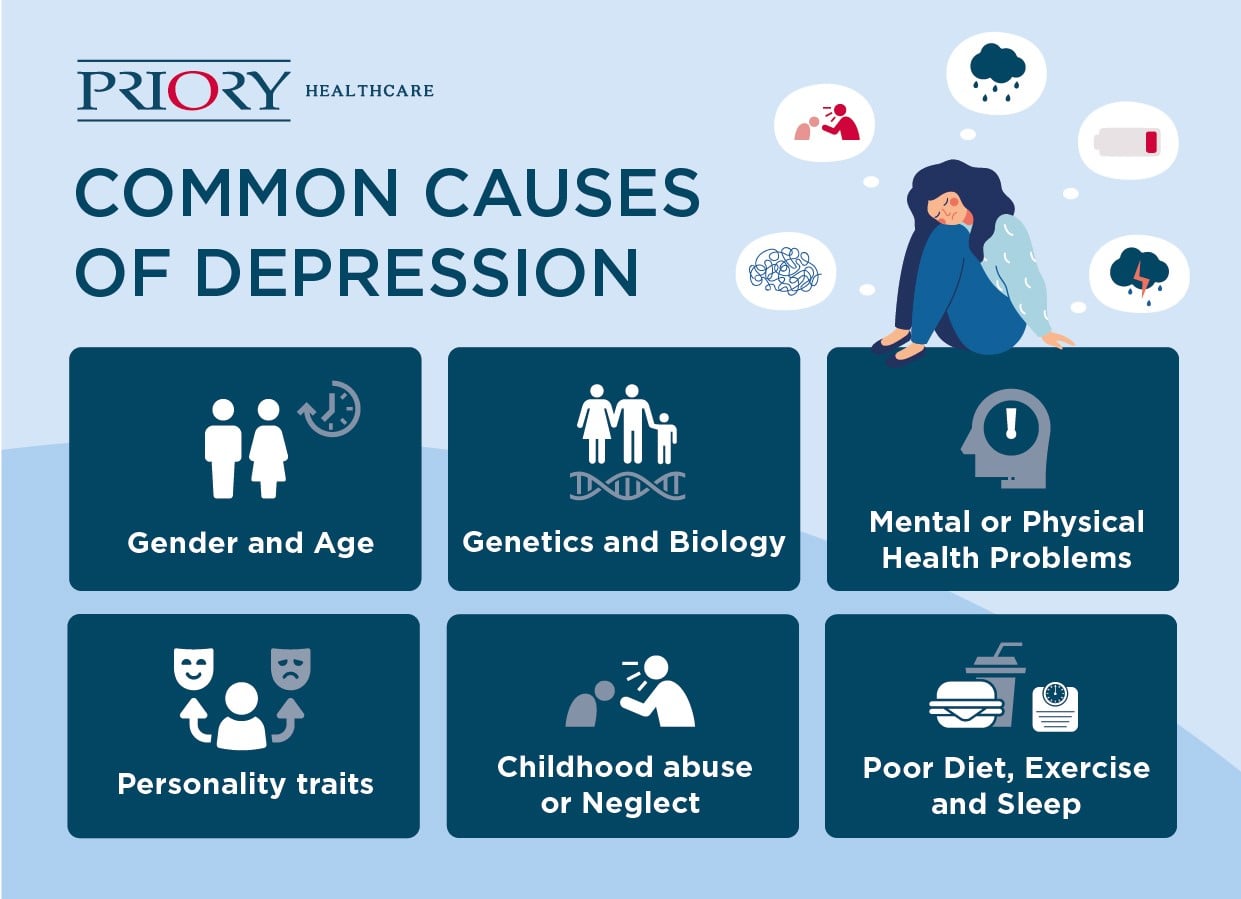 Women are more likely to develop depression than men. The reasons why are complex and not fully understood, but it is believed they include:

Your genes can also play a role in how likely you are to develop depression. While we can map people’s genes, this isn’t something we can do routinely yet, so we have to look at family history to reveal genetic vulnerability. Research shows that if you have a close relative (such as a parent or sibling) who struggles with depression, this makes it more likely that you will go on to develop depression.

The genetics are complex and it’s not a single gene that’s linked to depression. It’s more likely to be small effects from a combination of genes that interact with environmental factors to cause depression. This is an area of focus for future research and our understanding of the genetics of depression will grow rapidly in the coming years.

If you already struggle with a mental health condition, or have had mental health problems in the past, this also increases your chances of developing depression.

Also, depression is also a symptom of a number of other mental illnesses, including bipolar disorder, eating disorders and anxiety. Depression can also complicate other conditions such as anxiety disorders and psychosis, making it even more difficult to cope with depression,

Certain personality traits have been linked to depression. Research suggests that people who:

are more likely to suffer with depression than others.

Abuse and/or Neglect During Childhood

Experiencing abuse, whether physical, sexual or emotional, as well as neglect during childhood, have also been found to increase a person’s chances of developing depression.

Going through difficult experiences as a child can prevent you developing effective coping mechanisms, which means you’re less able to deal with negative emotions.  This means that people who have been abused or neglected during childhood are more likely to struggle with mental health conditions, including depression, as adolescents and adults.

Negative experiences as a child can also result in you having poor self-esteem and doubting your ability to cope or manage if things do get tough.

The relationship between these physical health problems and depression is complex. Struggling with physical health issues, especially if these issues leave you in constant pain, can make you feel resentful and as though you’re unable to live life to the fullest. You may find you’re grieving your lost potential or living with constant fear and uncertainty. These issues can cause problems in your relationships, disturb your sleep, or prevent you from exercising or going to work - all of which can have a devastating effect on your mood and mental wellbeing.

Our brains contain chemicals known as neurotransmitters, which send messages from one part of the brain to another. However, research shows that neurotransmitter function is altered in the brains of depressed people.

Some neurotransmitters in particular (e.g. serotonin and noradrenaline), appear to be linked to mood. If these neurotransmitters aren’t working properly, this can have a negative effect on a person’s mood, leading them to develop depressive symptoms.

Studies show that older people are more likely to struggle with depression. This could be down to a number of factors:

Priory therapist Niamh Maguire explores everything you need to know about depression, from the symptoms and causes to most effective treatments.

Studies show that there are clear links between a person’s diet, the amount of exercise they do, the quality of their sleep, and their mood. If someone isn’t:

this can leave them at an increased risk for developing depression.

What can Trigger Depression?

While the above factors can increase the likelihood of someone developing depression, the following can also trigger depression. It may also be unexplained or come ‘out of the blue’.

Going through these negative experiences may lead to depression because they can overwhelm your ability to cope. If you don’t have enough support following these events, this can increase the chance of your low mood developing into depression.

Also, traumatic events can also lead people to develop a condition known as post-traumatic stress disorder (PTSD). This condition has a number of distressing symptoms, one of which is depression. Depression can also be triggered by PTSD.

Major Changes in Your Life

As well as stressful life experiences, any major events that cause change in your life can also trigger depression in some people. These can include events such as:

Even if these events are seen as positive, the change and upheaval they can cause can lead to some people developing the symptoms of depression as a result.

Some prescription medications can also trigger depression as one of their side effects. Examples include benzodiazepines, barbiturates, opioids and beta-blockers. If you’re taking any prescription medications, it’s important that you always check the leaflet so you know what side effects to expect. If you have any concerns about this, you should speak to your GP or pharmacist.

Taking illicit drugs or drinking alcohol can also trigger depression. Alcohol and many different types of drugs are known as ‘depressants’ because they can alter the functioning of chemicals in our brain, leading to a depressed mood.

As well as this, abusing substances and binge drinking can cause us to have impaired judgement, difficulties at work or in personal relationships and an increased risk of self-harm. All of these can result in you feeling worried, hopeless and finding life hard to deal with. Waking up hungover and experiencing withdrawal symptoms from drugs and alcohol can also make you feel jittery, anxious, guilty and depressed.

Some people become depressed just during the winter months – this is known as seasonal affective disorder (SAD). During winter, we’re less able to get outside and spend time in daylight, which can affect our mood. As the nights draw in and the weather becomes worse, many people find that this can trigger the symptoms of depression.

Get Help for Depression Today

Whatever the cause of your depression, the important news is that it is a treatable condition and expert support is available. We can help you to address your symptoms and take steps towards the fulfilling future you deserve.

If your recognise one of the common causes of depression in your life, it might be time to reach out for professional help. Consider discussing your symptoms with your GP, as they are best placed to offer advice and an initial diagnosis.

You could also seek treatment for depression here at the Priory. We offer intensive inpatient stays, weekly therapy sessions that fit in with your life and work commitments, and online therapy that allows you to recover from the comfort of your own home.

Whichever treatment is best for your individual circumstances, contact us and speak to a highly trained mental health professional. We'll work with you to outline the most appropriate course of treatment and help you to get back on track.

Get the Best Mental Health Support

For details of how Priory can provide you with assistance regarding mental health and wellbeing, please call 0800 840 3219 or make an enquiry. For professionals looking to make a referral, please click here.