The common signs and causes of depression in men, plus the most effective treatments.

Lots of men struggle with depression throughout their lives and it can impact on them in many ways. Some men struggle to talk about their feelings or reach out for help, which can mean their depression gets worse over time. This may be because they believe that depression is a sign of weakness, or that they should simply ‘man up’, which can lead to some men trying to downplay how they’re feeling or cover it up.

For any men in this position, it’s crucial to understand that depression is a completely treatable mental illness, and there is no shame in accepting help.

Signs of Depression in Men 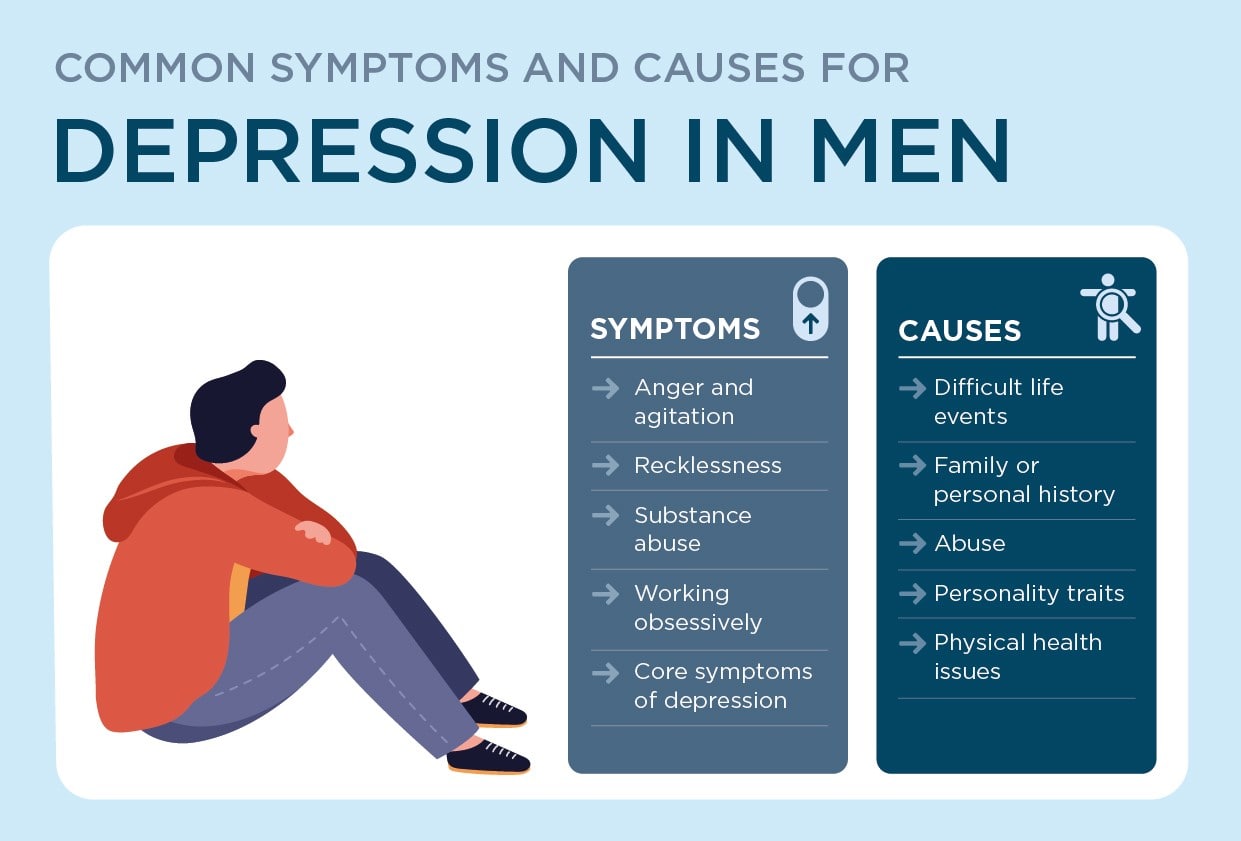 There are lots of symptoms of depression, which can affect anyone of any gender. Some of the most common depression symptoms to look out for include:

It’s also important to note that, according to the Office of National Statistics (ONS), men are around three times more likely to commit suicide when compared to women – and depression can be a key driver for this. If you’re in a state of crisis due to your mental health, or know someone who is, it’s really important to seek immediate crisis support.

What Causes Depression in Men?

Going through difficult life events such as divorce, losing your job or a bereavement, can be a common trigger for depression. After suffering an event like the above, the low mood you might develop can easily become depression – especially if you don’t have the necessary support.

Research has shown that genes can play a role in how likely you are to develop depression. Those who have a close relative, such as a parent or sibling, who has struggled with depression are more likely to develop it themselves. There is no single depression gene; it’s more likely that several combine together with environmental factors to give rise to depression.

Physical, sexual or emotional abuse are common triggers for depression, as is neglect or negative experiences during childhood. These experiences as a child can prevent you from developing the necessary coping strategies to deal with negative emotions, harming your mental health in adult life.

Depression in men is often associated with excessive alcohol consumption. Excessive drinking can lead to problems in your relationships and working life which in turn can lead to depression.

Alcohol is a chemical which is known to cause depression. As a form of self-medication, you might start drinking excessively in order to relieve symptoms of depression. However, done regularly this will only make the symptoms worse.

Excessive drinking can cause depression even in people who are not alcohol dependant, so it is recommended that anyone should drink no more than 12 units of alcohol per week and that you should have at least three alcohol free days per week.

If you tend to be someone who:

then these personality traits could mean you are more likely to develop depression.

These issues can quickly develop into depression if support or relief is not forthcoming.

Turning My Life Around: Patrick's Story

"My hopes for the future are that I'll be able to handle myself. And to gain a better understanding of who I am, where I am and where I'm going.

How to Help a Man with Depression

If you’re worried about the mental health of someone you know, there are a number of things you can do to help them with their depression.

Learn as much as you can

Be as informed on the topic as possible, allowing you to offer genuine support for your loved one. It should also help you to begin to understand what that individual might be going through.

Try to have a conversation with your loved one about his depression, when you can speak openly and honestly about how he’s feeling. Make sure that you:

Speaking to someone about their depression can be difficult, so make sure the focus is on you rather than him, so he doesn’t become defensive. For example, you could say “I’m worried about your behaviour” or “I wanted to know if there’s anything I can do to help.”

As well as the above, you could also encourage and help your loved one to keep track of his symptoms in terms of what they are, when they occur and whether there are any particular triggers.

By understanding these patterns and helping your loved one to spot them too, you’ll be better able to support your male relative or friend with his difficult emotions and learn to recognise when he’s going through a particularly hard time.

Encourage him to seek help for his depression. You could offer to call his GP on his behalf to make an appointment and then go along with him as moral support. You could also do some initial research into treatment options that might benefit your loved one. Ultimately, it’s important that you reassure him that there is no shame in asking for help and if he wants it, you will be there for him.

In the day-to-day, encourage him to keep doing things that make him happy. Eat well, attend social events with him and make sure he keeps up with any hobbies. These might seem small in isolation, but these mood boosters are incredibly helpful when managing depression every day.

Treatment for Men with Depression

Treatment options for depression don’t differ in men or women. It’s down to the patient and medical professional treating them to make a decision on the best course of treatment. Common treatments include:

If you are struggling with depression, or know someone who is, treatment options are available that can help you get your life back on track. Treatment can help you to address your symptoms and the underlying causes, creating the building blocks that help you continue to lead a fulfilling life.

Consider discussing your symptoms with your GP to get a handle on your state of mind, receive medical advice and offer an initial diagnosis. You could also seek treatment for depression here at the Priory, where we work with sufferers of depression every single day, helping them to overcome their mental health difficulties.

Our depression treatment is delivered by the very best mental health professionals in the industry. From intensive inpatient stays, weekly therapy sessions that fit in with your life and work commitments, or online therapy that allows you to recover from the comfort of your own home, Priory has the right treatment available for you. If, like many men, your depression symptoms are linked to excessive drinking, then it may be more appropriate to look at treatment for addiction to get at the root cause of your mental health problems.

Whichever treatment is best for your individual circumstances, contact us and speak to a highly trained mental health professional. We'll work with you to outline the most appropriate course of treatment and help you to get back on track.