Depression in Women: Types, Causes and Signs to Look out for

Depression in women is entirely treatable, and we can help you to address the unique causes of your depression, learn effective ways of coping, and take steps towards recovery.

Many women experience depression throughout their lives. They can find it impacts on them in lots of different ways including physically, emotionally, professionally and socially. In today’s modern world, it’s normal for women to have lots of different roles – wife, mother, professional, friend, caregiver, homemaker – so it’s not surprising that women experience pressure and ups and downs from time-to-time.

Depression is more common in women than in men. In fact, statistics show that women are twice as likely to struggle with depression than men. This could be down to lots of different reasons, including:

Additionally, depression in women usually occurs earlier in life, lasts longer and is more likely to recur, when compared to men.

Signs of Depression in Women 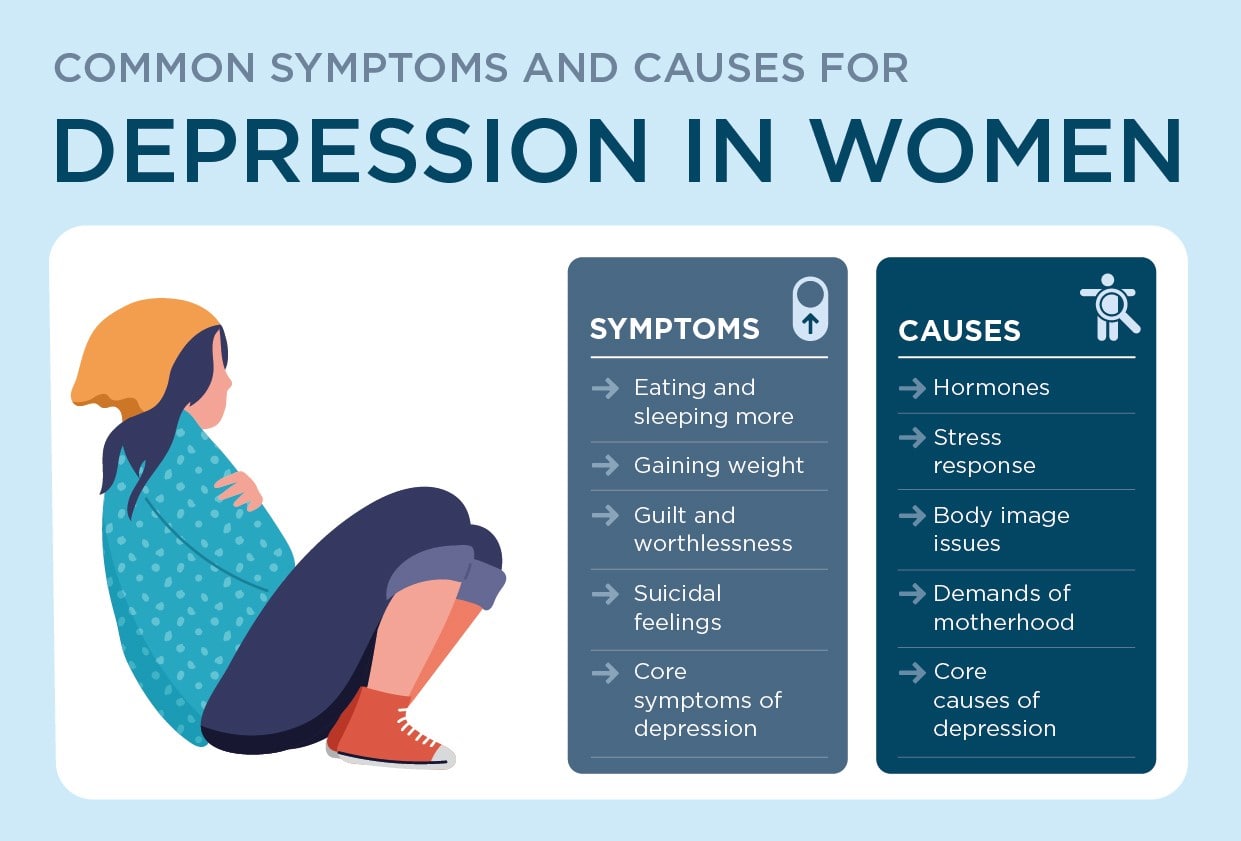 Depression has lots of different symptoms that can affect anyone, no matter their gender. Some of the most common symptoms of depression include:

However, there are also some depression symptoms that are more likely to be seen in women than men. These include:

Causes of Depression in Women

There are lots of potential causes of depression, which can increase the chances of you becoming depressed at some point in your life, whether you’re a woman or a man. These include:

As well as these more general causes of depression, there are some that are especially likely to affect women.

Women go through hormonal changes at all stages of their lives. These are linked to having periods, pregnancy and childbirth, and going through menopause. Many of these can cause symptoms of depression in women.

Women experience hormonal ups and downs all the way through each month, depending on where they’re at in their menstrual cycles. Some women get pre-menstrual syndrome (PMS) which can cause them to be irritable, tired and more prone to emotional outbursts. However, others can have more serious symptoms, where they experience intense mood disturbances, which can impact on their ability to function. This is known as pre-menstrual dysphoric disorder (PMDD) and can lead to depression symptoms in women.

Women’s bodies go through lots of hormonal changes during pregnancy and birth (known as the ‘perinatal period’), which can contribute to depression. Also, other issues that relate to pregnancy, such as having fertility problems or going through a miscarriage, can also cause some women to develop depression. After the birth of a baby, many women can have the ‘baby blues’, where they feel generally down and more tearful than usual. However, this normally goes away on its own after a few weeks. However, some women may go on to experience postpartum depression (PND), which is a specific and serious type of depression, that’s thought to be linked (at least in part) to the hormones that women experience after the birth of a baby. Thankfully, there are ways to treat postpartum depression.

Women may take certain hormone-based medications throughout their lives, including the contraceptive pill and hormone replacement therapy (HRT). These can also cause depression as one of their side effects.

Women produce more stress hormone than men. This means that women are more likely to develop depression after going through particularly stressful life events such as a bereavement or divorce.

Women are more prone to having issues with their body image, and an obsession with body image can be linked to depression. Body image issue can arise during puberty and lead to women having low self-esteem and depression in adulthood.

Juggling motherhood with work and other demands

In modern society, women are faced with lots of different pressures and are expected to juggle different demands including motherhood and full-time working. This is especially the case for women who are single parents. This can therefore lead to women suffering with stress, which can then trigger the symptoms of depression.

Types of Depression in Women

There are a number of different types of depression that can affect both women and men. These include:

SAD symptoms are only experienced during the winter months, and is linked to the lack of natural sunlight that we are exposed to during this time.

Whether you’re a woman or a man, the good news is that depression is treatable and you don’t have to struggle on your own. The most important thing you can do is seek help. At Priory, we are able to provide expert depression treatment at our hospitals and wellbeing centres, helping you get back on track. For more information on how we treat depression at Priory, you can visit our treatment programmes page.