What are the Different Types of Depression?

Outlining the most common types of depression and their symptoms.

We treat a number of different types of depression at Priory. Each type can cause different depression symptoms and can impact on people in unique ways.

Experts at the Priory have lots of experience in treating many kinds of depression and its causes. We can give you the tools to cope with your depression and help you take steps towards a much healthier and fulfilling life.

Recognising the type of depression you’re struggling with is important so you’re able to take steps towards getting the support you need.

Depression is a mental health condition that causes you to experience persistent sadness and low moods. We can all feel ‘down’ from time to time, but if you struggle with depression, your low moods can be so bad that you may struggle to function in your daily life.

Having a depressed mood can reduce your motivation and energy levels, and disrupt lots of different areas of your life. It can affect you emotionally, socially, professionally and even physically.

Priory therapist Niamh Maguire explores everything you need to know about depression, from the symptoms and causes to most effective treatments.

The most common depression types that we treat are:

We are also able to offer specialist treatment for more specific types of depression such as:

You can read more about each of these forms of depression below. 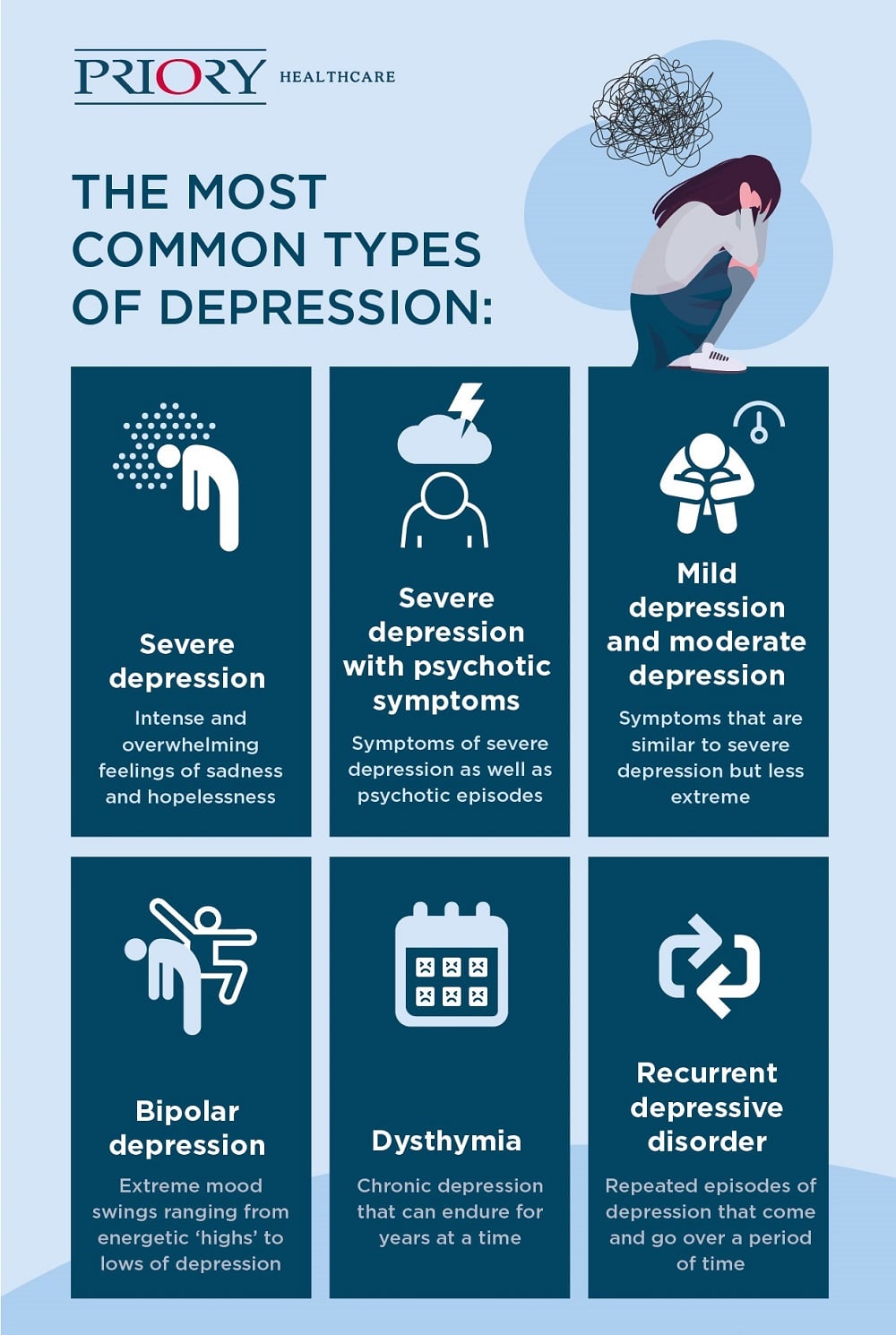 If you find you are experiencing significant fatigue and a loss of interest in activities that you once enjoyed, it may be that you’re suffering from severe depression.

Severe depression is the most serious type of depression that someone can have. It is also referred to as:

If you struggle with severe depression, it is likely to be having a profoundly damaging impact on your quality of life. It can cause intense and overwhelming feelings of sadness and hopelessness, which affect your ability to function effectively.

"Telling your story to someone who knows how to listen is massively important and necessary to healing.”

Psychotic depression can be an extremely difficult and frightening condition to deal with. Not only does it result in the intense feelings of sadness and hopelessness that come with severe depression, but it can also cause you to experience delusions (believing things that aren’t true) and hallucinations (seeing or hearing things that aren’t real). This can affect your reality and negatively influence how you see the world.

Mild depression and moderate depression tend to cause symptoms that are similar to severe depression, except these are less extreme.

This doesn’t mean that these types of depression are insignificant. Mild and moderate depression can still affect you on a daily basis, although you’re more likely to experience small improvements in your symptoms from day-to-day.

People who have a diagnosis of bipolar disorder, also known as ‘manic depression’, experience extreme mood swings. These range from energetic ‘highs’, known as mania, right through to the extreme lows of depression. Episodes of mania and depression can last anywhere between several weeks and several months.

Bipolar depression is different to other forms of depression because it is followed by episodes of mania and forms part of a cycle. It can be difficult to diagnose at first because, at face value, bipolar disorder depression can appear to be very similar to severe depression. It is only when a manic episode occurs that it becomes apparent the person has bipolar disorder. This is the point at which they are cycling between the two extremes.

Bipolar disorder depression can be intense. It usually consists of the same symptoms as severe depression, except these can be even more extreme. Bipolar depression is also sometimes accompanied by psychotic episodes, including delusions and hallucinations.

Because individuals with bipolar disorder swing between the opposite extremes of mania and depression, the condition can make dealing with your everyday life very challenging. It can put a huge strain on your relationships and can make holding down a job difficult. These problems can be magnified and cause intense feelings of guilt and shame when you’re going through a depressive episode.

Dysthymia, also known as ‘persistent depressive disorder (PDD)’, is a chronic type of depression that can endure for years at a time.

It’s completely normal to feel upset or ‘down’ every now and then. However, if you struggle with dysthymia, you will typically find that you feel sad and hopeless most of the time. This can have a significantly negative impact on your quality of life.

Like depression, PDD causes people to experience low moods, feelings of hopelessness, low self-esteem and a lack of enjoyment in daily life. However, dysthymia differs from other forms of depression in two key ways:

Because of how persistent and enduring dysthymia is, it can be extremely draining and have a negative impact on every area of your life. Constantly dealing with low mood can leave you unmotivated and struggling to function effectively.

Recurrent depressive disorder, also known as ‘recurrent depression’, is when you experience repeated episodes of depression that seem to come and go over a period of time. During the time in between these episodes, your mood may be relatively stable and you’ll typically feel well. 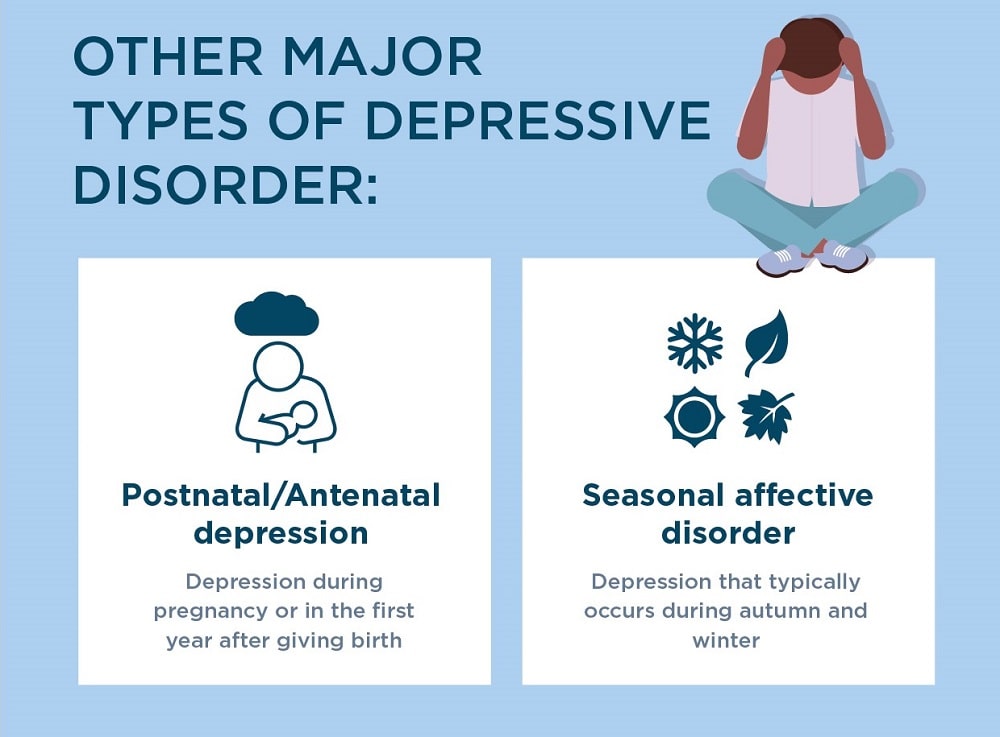 Depression in the first year after giving birth (postnatal depression or postpartum depression) are specific forms of depressive illness, which are directly related to birth and becoming a parent.

This period of time in someone’s life (known as the perinatal period) is a huge step and brings with it many different challenges. While it’s normal to experience lots of different emotions during the perinatal period, some people may find that this develops into depression that needs specialist help.

Seasonal affective disorder (SAD) is another specific form of depression that typically occurs during autumn and winter. It is also known as ‘winter depression’.

Many people find that their emotions are affected by the weather. For example, you may find that you feel happier and more positive on a bright sunny day. However, the lack of daylight and the generally bad weather that we get in autumn and winter can make people feel so low that their ability to function on a daily basis is compromised.

How do I know which type of Depression I have?

If you think you might be struggling with depression, no matter what type, the most crucial first step is to speak to a professional about how you’re feeling.

A first port of call may be for you to speak to your GP. They’ll be able to evaluate your symptoms and recommend an appropriate course of action in terms of treatment and next steps. They may also be able to refer you to a specialist mental health provider such as Priory, to receive support.

Alternatively, you can contact Priory directly. Our friendly team are always here to listen to your concerns and recommend an appropriate treatment programme for you. Our mental health and depression experts will be able to identify the type of depression you’re struggling with, and support you every step of the way towards overcoming it.

No matter what type of depression you’re struggling with, it’s important to remember that you’re not alone. Help is available and we can support you every step of the way towards getting your life back on track.

Our highly qualified specialists have extensive experience treating all types of depression. You’ll benefit from a personalised treatment plan which will help you to address your personal challenges and pave the way towards a healthy and happy future.

We offer lots of different options for depression treatment at Priory, ranging from intensive inpatient stays, to weekly therapy sessions that fit in with your life and work commitments - including from the comfort of your own home with online therapy.

Remember - depression is a mental illness, not a sign of weakness, and it’s possible for you to make a full and lasting recovery.

Get the Best Mental Health Support

For details of how Priory can provide you with assistance regarding mental health and wellbeing, please call 0800 840 3219  or make an enquiry. For professionals looking to make a referral, please click here.